Bill and Sharon De Lannoy were the chief instigators behind the establishment of Beacon of Hope International. While Bill was still working, he was involved in engineering projects in South Africa.  Bill had several extended stays in South Africa while working on the projects.  Being the dedicated missionaries that Bill and Sharon are, they established relationships with churches and parachurch organizations while in South Africa.  They led a mission trip to SA in 1999 and worked with Campus Crusade (CRU) SA to do Street evangelism. In 2004 they planned another trip to work with CRU again but this time initiating an HIV/AIDS Prevention Program. These mission trips became an annual event from 2006 through 2018. Bill and Sharon continued to be the team leaders in 2006 and co-leaders in 2007. Beacon of Hope was established in 2007 to continue this mission activity.  Three of Bill and Sharon's grandchildren have participated in this ministry, Brandon in 2004, Alexis in 2007 and in 2010 Kelsey accompanied her grandpa.

Shortly after Bill's passing on January 27, I received a message from Kelsey to inform me about her grandpa.

Hi Glynn, How are you doing? It's been a long time. I'm not sure if you heard the news, but my Grandpa Bill De Lannoy passed away last week at the age of 89. He has a service coming up at the end of the month—I'll send you the information in case you'd like to come—but would you do me a favor? I am curious to know how many mission trips he's been on with you...or any other fun facts you have about his mission work.
Hi Kelsey, It is great to hear from you again. I wish it was under more cheerful circumstances. Although what could be more cheerful than knowing he has gone on to be in the presence of Jesus. Yes, we did hear about Bill's passing from Sharon and we are aware of the plans for his memorial service. Actually, Judy just RSVP'd for us today I believe.
Regarding the trips that Bill was with us in Africa.
He and Sharon did a trip in 1999 and this was before I was involved.
2004 Bill invited me to go with them. in this trip Bill, Sharon and your brother Brandon were there.
2006 Again Bill and Sharon.
2007 Bill, Sharon and Sharon's granddaughter Alexis.
2010 Bill and you (Kelsey).
2017 Was Bill's last trip with us. This was the trip when we brought all of our mission partners from South Africa, Zimbabwe, and Zambia together for a conference that we called a Renewal Conference. Only our partner from Uganda was unable to make it. After a week of conference, our American participants split up and went back to Zambia and Zimbabwe with the team members. Judy, Bill and I went back to Richards Bay in South Africa.

Fun facts: I believe you came with us to church at Clement's church in Eniwe in 2010. Mike Langdon preached there. While Judy, Bill and I were there in 2017, we did a Smart Choices class which was sponsored by one of the Indian Churches, at Clement's property. There were 10 Sangomas attending the class. A Sangoma is a witch doctor, very satanic. All ten of these Sangomas gave their life to Jesus. They all burned their witchcraft paraphernalia and have been participating at Clement's and surrounding churches. Bill was so taken by this; I think that every time I saw him after that he would ask me about the Sangomas and how they were doing. Bill was also quite taken by the fact that Clement had an elderly white couple living on his property. I think they had been going through difficult financial times and Clement gave them a place to stay. They might have been paying him rent but I'm sure it would have been a fraction of what they would have had to pay any place else. This was a complete reversal of roles. In South Africa it is normally the more affluent white people helping the Africans who were in a bind.

There were four aspects of this experience that intrigued Bill.
1) An Indian sponsored event.
2) Held at an African Village Church.
3) That was providing accommodation for a white couple, down on their luck.
4) Finally; 10 satanic Sangomas were saved and are following Jesus.
One of the last times I saw Bill, about three months ago at a mission evening event at their Liberty Baptist Church, he said this was always on his mind and he felt God might be prompting him to go back to Africa and developing a model like this.

Another fun fact that I have great joy in sharing, is that this ministry that Bill and Sharon instigated by inviting me to participate with them has grown into a ministry financially supporting 12 mission teams in Africa, spread across four countries and to date over 210,000 youth across Africa have heard how to protect themselves against an HIV infection. They have learned to think more critically about the life choices they make, and they have all seen the Jesus film and been presented with the opportunity to follow Jesus. Of these kids, about 50% claimed to already be Christians but made renewed commitments to follow Jesus and 30% made new commitments to follow Him. This represents about 63,000 new converts. To put all of this into context, I would urge you to watch and listen to this message that starts off with a story about a missionary couple that went to the Congo probably 70-80 years ago. They thought that they had failed miserably only to learn many decades later that one hundred churches had been planted across the Congo as a result of one little boy who heard bible stories from them as he was delivering eggs and chickens to their house.

I will give more thought to your request for fun facts about Bill and see if I can up with any more interesting things regarding Bill while participating in our mission trips.
I probably should have started out by offering condolences to you and all of your family for the loss that you have suffered. While all of us who are left behind are saddened by losing Bill, in reality he has just passed from life to life and now he's in the presence of Jesus. Bill and Sharon are a truly remarkable couple. They have had a profound effect on the strengthening of my faith, and they have impacted the lives of hundreds of thousands of people over the course of their Christian life. There will be a great cloud of witnesses that rise up and call them blessed when all is revealed to us. God Bless you and all of your family. Morn for a minute but then rejoice for a brilliant life well led. I am sure that Paul would agree that Bill has surely run a good race and now he has crossed the finish line. All of us who know him are beneficiaries of his race well run. 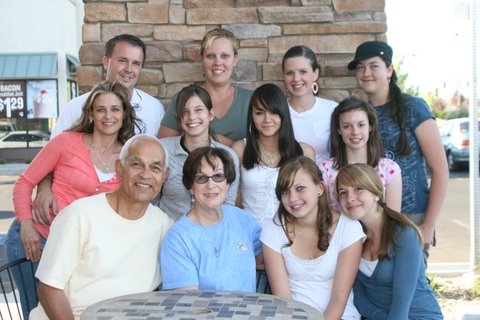